PRESIDENT OBAMA AND US FOREIGN POLICY PANDERS TO TURKEY AND TURNS THEIR COLLECTIVE BACKS ON THE ARMENIAN GENOCIDE... 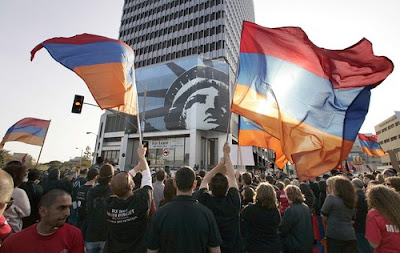 NOW IS THE TIME FOR ALL GOOD PEOPLE TO COME TO THE AID OF THEIR COUNTRY!
So, should we continue to be enamoured with fluffy talk about Portughese water-hounds OR head-on tackle difficult conflicts such as Obama's refusal to honour another "hope and change" campaign pledge along with his refusal to pass gun control against the NRA and their assault weapons...
We need to stop this Presidential honeymoon and remain vigilant with spurious practices by all levels of our democratically-elected government: federal, state and municipal.
For the most part, I strongly ascertain that President Obama is genuinely attempting to fulfill his campaign pledges to the American people, but he has already lied to us, twice now. The third big lie looms as the New Escalated War in Afghanistan.
We need to exercise our right to participate in our government and to criticize it when it does not serve our ethical needs.
As Pete Seeger sings, "This land is your land. This land is my land...from California to the New York Island."
Wayne Dennis Kurtz.
Posted by videopal at 3:57 AM 1 comment: Links to this post