RECALL ARNOLD THE PERPETRATOR AND THE TRAITOR. 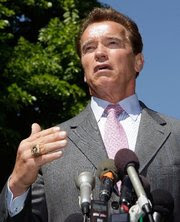 NOW IS THE TIME FOR ALL GOOD PEOPLE TO COME TO THE AID OF THEIR COUNTRY!
THE CRUBENATOR DESIRES TO BALANCE CALIFORNIA'S BUDGET BY CUTTING SCHOOL LUNCHES FOR POOR CHILDREN, RELEASING STATE PRISONERS, AND HARSHLY CUTTING BACK HUMANITARIAN PROGRAMS FOR THE ELDERLY (I ANSIANI), THE DISABLED AND MENTALLY ILL PEOPLES, ALL-THE-WHILE THIS JERK FLIES BACK AND FORTH TO WASHINGTON, D.C. IN ORDER TO BROKER MORE BACKROOM "DEALS" WITH HIS EASTCOAST BANKER BUDDIES TO FURTHER OPPRESS THE COMPROMISED. Wayne Dennis Kurtz.
Posted by videopal at 10:28 AM No comments: Links to this post

FULL AND SUDDEN IMPACT:CALIFORNIA IS BANKRUPT... 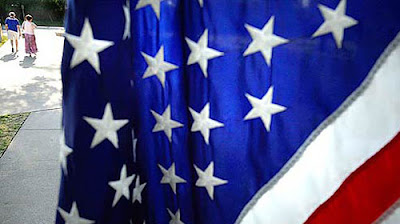 NOW IS THE TIME FOR ALL GOOD PEOPLE TO COME TO THE AID OF THEIR COUNTRY!
WHERE HAS ALL THE MONEY GONE? AS THE GRUBENATOR FLIES TO WASHINGTON, D.C., TO "CURRY FAVOUR" WITH THE BELTWAY POLITICIANS...Wayne Dennis Kurtz.

California voters exercise their power -- and that's the problem

Residents relish their role in the lawmaking process, but they share the blame for the state's severe dysfunction.
By Michael Finnegan
May 20, 2009
Californians are well known for periodic voter revolts, but on Tuesday they did more than just lash out at Gov. Arnold Schwarzenegger and the Legislature over the state's fiscal debacle.

By rejecting five budget measures, Californians also brought into stark relief the fact that they, too, share blame for the political dysfunction that has brought California to the brink of insolvency.

Rightly or wrongly, voters in the special election refused either to extend new tax hikes or to cap state spending. They also declined to unlock funds that they had voted in better financial times to set aside for special purposes.

Nearly a century after the Progressive-era birth of the state's ballot-measure system, it is clear that voters' fickle commands, one proposition at a time, are a top contributor to paralysis in Sacramento. And that, in turn, has helped cripple the capacity of the governor and Legislature to provide effective leadership to a state of more than 38 million people.

Clogged freeways, the decline of public schools, an outdated water system and a battered economy are just a few of the challenges demanding action by state leaders. Instead, they are consumed by yet another budget crisis, one that voters worsened Tuesday.

Voters are to decide on five propositions aimed at shoring up California's finances and another that would freeze state salaries.
Other contests include a runoff for L.A. city attorney and races for L.A. City Council, state Senate and U.S. House seats.
» County-by-county propositions result map
» Live results for all state and local races
What would the props do?
» Prop 1A: Rainy Day Fund
» Prop 1B: Education Funding
» Prop 1C: Modernize Lottery
» Prop 1D: Child Services Funding
» Prop 1E: Mental Health Budget
» Prop 1F: Elected Official Salaries
"No one's really stepping back and confronting the harsh realities that face our state in a critical sense, because of constraints put on our elected leaders," said Mark Baldassare, president of the Public Policy Institute of California. "We're unable to focus on the long term and the big picture at a time when we desperately need to do so."

The results Tuesday fit Californians' long-standing pattern of demanding what is ultimately irreconcilable, all the more so in an economic downturn: lower taxes and higher spending.

"We all want a free lunch, but unfortunately that doesn't exist," said former Gov. Gray Davis, whose 2003 recall stemmed largely from a budget crisis brought on by the dot-com bust. For decades, Davis said, Californians have been "papering over this fundamental reality that the state has been living beyond its means."

Davis and many other elected officials bear some responsibility for that. But so do voters.

In the Proposition 13 tax rebellion of 1978, Californians voted to require a two-thirds approval by the Legislature to raise taxes, a major obstacle to budget agreements. Over the last couple of decades, voters have also passed a patchwork of ballot measures directing billions of dollars to favorite causes, among them public schools and transportation projects.

On Tuesday, Californians showed they were unwilling to scale back their demands in tight times: Voters turned down propositions that would have freed up money that they set aside years ago for mental-health and children's programs.

"The irony is that the more the hands of the Legislature and governor are tied up, the more frustrated people are," said Tim Hodson, director of the Center for California Studies at Cal State Sacramento.

"They're looking for cheap answers -- throw the guys out of power and put somebody else in, or just blame the politicians and pretend you don't have to raise taxes when you need money," he said.

"This is what the public wants, and they deceive themselves constantly. They're not realistic."

The public's contradictory impulses were laid bare by a recent Field Poll. It found that voters oppose cutbacks in 10 of 12 major categories of state spending, including the biggest, education and healthcare. Yet most voters were unwilling to have their own taxes increased, and they overwhelmingly favored keeping the two-thirds requirement for tax hikes.

"They clearly want more in services than they're willing to pay for in taxes," said Ethan Rarick, director of the Robert T. Matsui Center for Politics and Public Service at UC Berkeley.

Also intensifying California's troubles is a surge in debt, often with voter consent at the ballot box, which makes future budgets harder and harder to balance. Under Davis, outstanding general-obligation debt jumped from $26 billion to $37 billion; it has soared to more than $70 billion under Schwarzenegger, according to the state treasurer's office.

Adding to the state's difficulties is the complexity of many ballot measures, no doubt a factor in the defeat of the main budget measures that lawmakers put before voters Tuesday.

"We pay the legislators to go to Sacramento and figure these things out," said Denise Spooner, a lecturer on California history at Cal State Fullerton.

As for the cumulative problems created by the last few decades of ballot-measure voting, she said, "I certainly don't think this is what the Progressives had in mind."

To John Hein, a veteran Sacramento campaign consultant, the absence of any master vision by voters appears to be a key flaw in the state's recent history with ballot measures.

"They kind of take each issue in a microcosm, rather than relate the decision to prior decisions, or future decisions that they might make," he said. "Voters don't think about the consequences of how one thing fits with another."

Others point to the term limits that voters imposed on state officials in 1990 as an enduring problem. Lawmakers who focus on quick career advancement tend to neglect California's long-term problems, they say.

Whatever the ups and downs of the proposition system, California's voters have seen themselves for a full century as "the arbiters of the future of the state," said social historian D.J. Waldie. To Waldie, the grim circumstances of Tuesday's election suggest that they are losing faith in any grand ambitions for public investment in California's future.

"I'm rather pessimistic at this point," he said. "We're reaching the point where Californians are throwing in the towel."

Posted by videopal at 5:55 AM No comments: Links to this post