THERE NEEDS TO BE CRIMINAL AND CIVIL REPERCUSSIANS FOR THE HIGHLY-IMMORAL AND ILLEGAL ACTS OF CHILD MOLESTATION IN OUR PRIVATE AND PUBLIC SCHOOLS, NOW!
Wayne Dennis Kurtz. 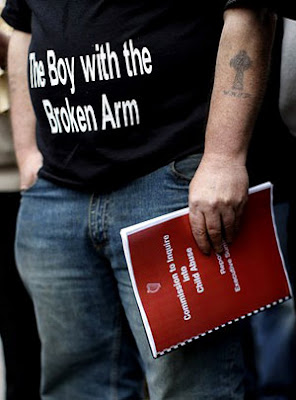 An Irish commission finds that students at more than 200 schools were molested and subjected to excessive punishment over a six-decade period while the church covered up misdeeds.
By Henry Chu
May 21, 2009
Reporting from London -- Boys and girls in Ireland were beaten, sexually abused and emotionally terrorized for decades in workhouse-style schools run by the Roman Catholic Church where a "culture of silence" protected victimizers rather than the children in their care, according to a long-awaited report.

For more than half a century, chronic, excessive and arbitrary punishment created "a climate of fear" in which students at schools administered by Catholic religious orders lived "with the daily terror of not knowing where the next beating was coming from."

Through it all, the report says, government inspectors failed to stop what was going on. The neglect came despite attempts by some individuals to bring their abusers to account in an effort to lessen the trauma victims suffered for years afterward and that still haunts many today.

These are some of the findings of the controversial 2,600-page report unveiled in Dublin on Wednesday after a nine-year investigation by Ireland's Commission to Inquire Into Child Abuse. Drawing on the testimony of nearly 2,000 witnesses, men and women who attended more than 200 Catholic-run schools from the 1930s until the 1990s, the commission painted a damning picture of a church engaged too often in covering up misdeeds instead of rooting out their perpetrators.

The five-volume report is a major rebuke to a religious institution that continues to wield significant, albeit declining, influence on Irish society, especially on moral issues such as divorce and abortion. But the church's standing has been weakened since the abuse scandals began to become public in the mid-1990s, by which time many of the schools had closed. This loss of stature has undermined the church's ability to counter a rise in secularism that accompanied Ireland's leap in prosperity.

The investigating panel found that sexual molestation was "endemic" in the church, committed by offenders who were often transferred to other institutions rather than dismissed or turned over to authorities.

Nonetheless, the report was not tough enough for some of the victims. Many are angry that it includes no names of alleged offenders, an omission that one of the religious orders under investigation fought for and won in court. Only pseudonyms are used, making slim the chances of criminal prosecution based on the report's findings.

"We expected that these people would be named and shamed and that some of them would be convicted," John Barrett, who testified before the commission, told Irish radio station Today FM.

"At the end of the day, some of us won't sleep tonight. We're still nowhere near the truth," said Barrett, 55, who was sexually abused in the 1960s while at a school for boys with learning disabilities run by the Brothers of Charity in County Cork.

Cardinal Sean Brady, the leader of Ireland's 4 million Catholics, offered an apology Wednesday for the abuses found by the commission.

"I am profoundly sorry and deeply ashamed that children suffered in such awful ways in these institutions," Brady said in a statement released by the Irish Catholic Bishops' Conference. "Children deserved better, and especially from those caring for them in the name of Jesus Christ."

Edmund Garvey, a spokesman for the Christian Brothers, whose 2004 lawsuit against the commission resulted in the shielding of names in the final report, told RTE Radio that the order was "deeply sorry, deeply regretful."

The Catholic Church sponsored scores of reformatories, orphanages and industrial schools where more than 30,000 boys and girls deemed to be delinquent or incorrigible were sent from the 1930s until the end of the 20th century. In some instances, the children's only "fault" was to be born out of wedlock.

The commission found that corporal punishment and other forms of physical abuse were standard practice at many institutions for dealing with any perceived misbehavior.

"Extreme punishment was a feature of the boys' schools. Prolonged, excessive beatings with implements intended to cause maximum pain occurred with the knowledge of staff management," the report says.

Girls also were subject to "ritualized beatings," often administered by the nuns in a way calculated to "increase anguish and humiliation," the report found.

"One way of doing this was for children to be left waiting for long periods to be beaten. Another was when it was accompanied by denigrating or humiliating language."

Some victims told the commission that seeing or hearing other children being beaten was a terrifying experience that has haunted them ever since.

"It's something you never forget," Tom Sweeney told Irish television, referring to the five years he spent in industrial schools, including two years at Artane, a facility run by the Christian Brothers in Dublin.

"Things didn't happen in your life after that," said Sweeney, 63. "Your life fell apart. Your marriage fell apart. Your communication with your children fell apart, and it all stems [from] being in Artane. We never got closure, and we never will get closure."
Posted by videopal at 6:22 AM No comments: Links to this post