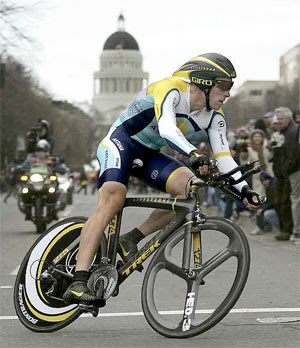 Rinaldo Nocentini of Italy earned the yellow jersey for the second straight day by finishing in a pack with Armstrong and his Astana teammate Alberto Contador. The 2007 Tour winner is six seconds back, with Armstrong eight seconds back.

Armstrong went straight to the team bus after the stage and did not speak to reporters. He posted on Twitter: “St8 done. Tough but not 2 challenging. Had antidoping control AGAIN. Couldn’t pee so it took forever. Sucked! Now I’m starting to wonder tho”

Teammate Levi Leipheimer is 39 seconds off the pace in fourth place overall.

Nocentini almost lost his yellow jersey when the main race favorites— including Armstrong and Contador—left him behind in the last of the climbs. He credited an escort from his AG2R La Mondiale teammate Stephane Goubert for helping him catch up.

“I had been dropped,” said Nocentini, a 31-year-old riding in his first Tour. “To him, I say ‘thank you’ for helping me hang on to the yellow jersey.”

Before the start, Leipheimer tweeted: “Today’s stage starts off going uphill for 20 miles!! That’s a rude awakening, plenty of riders will be looking to get in the breakaway.”

He certainly was right.

Two-time Tour runner-up Cadel Evans, a pre-race favorite, was among those to attack on the first climb, the Envalira Pass, at the 14.6-mile mark. He and others built a lead on the pack of about 2 minutes, but the Australian was reeled in after about 39 miles.

Sanchez, who won the Paris-Nice stage race in March, led a four-person breakaway toward the finish line. He looked skyward and tapped his chest after crossing just ahead of France’s Sandy Casar and Mikel Astarloza of Spain. They clocked 4 hours, 31 minutes, 50 seconds for the 110-mile trek along three big climbs from the Pyrenean principality of Andorra to Saint-Girons.

“You need to have luck,” said Sanchez, who won a Tour stage last year. He dedicated the victory to his older brother, Leon, who died in a quad bike accident four years ago.

The victory for Caisse d’Epargne rider Sanchez was a boost to his team. Oscar Pereiro, the 2006 Tour champion, quit the race due to fatigue and the team’s star rider, Alejandro Valverde, is not in the Tour because of an Italian doping probe.

Vladimir Efimkin, who was reeled in by Sanchez after a failed solo breakaway, finished the stage in fourth place, while the main pack trailed 1:54 behind.

“That was a really long, hard climb,” said Christian Vande Velde of Garmin-Slipstream, who was 1:24 behind the yellow jersey and eighth overall.

Among the other favorites, Andy Schleck of Luxembourg is 1:49 back in ninth, defending Tour winner Carlos Sastre of Spain is 2:52 back in 16th, and Evans is 3:07 behind in 18th place.

Riders face a third and final day in the Pyrenees on Sunday, a 100-mile course from Saint-Gaudens to Tarbes via the famed Tourmalet Pass, one of the toughest climbs in pro cycling.

The three-week race ends July 26 in Paris, with the Alps, a final individual time trial and the dreaded Mont Ventoux awaiting in the last week.

Posted by videopal at 11:36 AM No comments: Links to this post

Jonas Silverio must have "due process" in Superior Court as that is his legal right. Yet, this dire situation has become "a witch hunt" because Silverio was "protected" for many years by the Lynwood Unified School District's so-called superintendent Dyhan Lal. the LUSD school board, local staff and the Lynwood City Council as well. While I taught at Firebaugh High School in 2006-2007, I complained as a "mandated reporter" (according to my responsibilities in the State of California's Education Code) to Child Protective Services, LACOE -Los Angeles County Office of Education, Steve Cooley -the Los Angeles County District Attorney, the Los Angeles County Sheriff's Department, the LUSD's school board, and Jack O'Connell, California's Secretary of Education. These government agencies did absolutely nothing to protect the Firebaugh teachers and students from the evil Machiavellian machinations of Jonas Silverio, Cheri Tuninistra, Lal, Joseph Nichols, Major Luna and other Lynwood staff. Firebaugh High School was a cross between a prison and an insane asylum as you can not blame that environment on fourteen year-old teenagers. Irresponsible adults who were paid very lucrative salaries created that despicable environment. For example, my English class did not have State-mandated (California's Williams Act) textbooks or a self-contained classroom (without black mold) for many weeks. The whole Lynwood Unified School District needs to be placed under Consent-to-creed State Supervision. The City of Lynwood is inherently corrupt and gets away with murder, literally. The Lynwood Unified School District sports a 70% high school dropout rate as that rates an "F" grade, in my book. California needs to take over daily supervision of everything that goes on in Lynwood. Nothing short of this drastic change will make a difference. Wayne Kurtz.
/

Former Firebaugh High Principal Jonas Silverio was arrested on suspicion of molesting girls he coached on the volleyball team.

Posted by videopal at 7:14 AM No comments: Links to this post