IF YOU HAVE A TEENAGE ITALIAN DAUGHTER, KEEP HER AWAY FROM ITALY'S NOT-SO-PRIME MINISTER, SILVIO BERLUSCONI, WHO DOESN'T KNOW HIS MATH WELL AS A 72 YEAR OLD MAN HAS NO BUSINESS WITH A 17 YEAR OLD TEENAGER (TO HIS CREDITO, SHE IS A FEMALE, THIS TIME) FROM SICILY.
VERGONIA = SHAME ON YOU MR. ITALIAN MAFIA AND FILM BOSS AND SHAME ON ITALY FOR VOTING THIS ABSOLUTE CRETINO INTO AN ELECTED OFFICE, AGAIN.
ISN'T THAT AN OLD ITALIAN SAYING: IF YOU FOOL ME ONCE, THAT'S ONE THING but IF YOU FOOL ME TWICE, THEN IT'S ON ME...Wayne Dennis Kurtz. 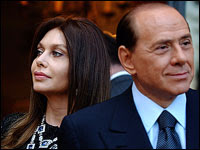 Where will the power lie in Iran?

Posted by videopal at 2:52 AM No comments: Links to this post