LANCE ARMSTRONG, AT 37 YEARS OLD, COMPETES WITH INTEGRITY IN THE 2009 GIRO D' ITALIA,,, 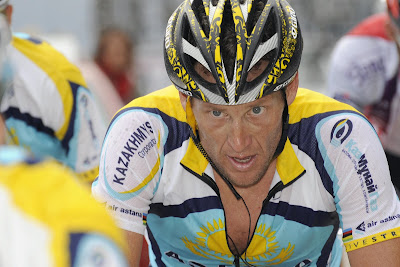 NOW IS THE TIME FOR ALL GOOD PEOPLE TO COME TO THE AID OF THEIR COUNTRY!
With his eyes chiseled deep into his head, Lance Armstrong looked on. Up ahead, top riders like Ivan Basso, Danilo DiLuca, Levi Leipheimer, Denis Menchov and Carlos Sastre rode away on the stage five climb to Alpe di Siusi at the 2009 Giro d’Italia.
In his prime, Armstrong could have dropped any of these riders with just one leg. But that was when he was in his prime. On Wednesday, the 37-year-old American found himself in the middle of his biggest test since announcing his comeback: a 125-kilometer mountain stage in the Tour of Italy.
With his back hunched, Armstrong’s eyes appeared to be searching. Perhaps he wondered, at least briefly, just why he returned to competitive racing after retiring three years absence. Just seven kilometers from the finish on Alpe de Siusi, Armstrong was all alone except for a handful of Astana teammates helping him limit his time losses on the day.
“I hoped to lose two minutes,” Armstrong said afterwards. Instead he lost three on what could at best be described as a valiant effort and an example of the seven-time Tour de France winner’s legendary concentration.
But Armstrong is a master of peaking. He knew coming into this race that he was in no condition to contend for overall victory. “No I don’t think that is possible. I don’t think it’s possible to win the Giro,” he said before the start of the race. “We’re just not there yet.”
The Giro d’Italia is the first major test of his comeback. After breaking his collar bone in March, the Giro-like the Tour de France a three-week race-became a “Must.”
Currently, after the first five stages, Armstrong has proven to be a solid “B” student-not bad for a rider that has not raced in Europe for over three years.
“Like I said in the beginning, the first half is not going to be my half. I have to ride into the race and get my condition back after the accident,” Armstrong said after finishing 2 minutes 59 seconds behind Denis Menchov, the winner of stage five. “I didn’t come in with any big illusions. I knew I’d be minutes behind the best guys.”
Although Menchov did not see Armstrong for much of the final climb, he seemed confident that Armstrong is on track for the Tour de France. “Lance Armstrong isn’t here to fight for overall. But he’s good - he’ll be good at the Tour.”
After hitting the Alps early in this year’s race, the riders now have a significant break before any serious climbing returns. That’s good news for Armstrong, as it gives him ample opportunity to improve his condition and recover before the next major test.
“I’m definitely a little tired, it’s a hard climb and we knew that we’d be behind,” he told Rai TV. “We just said ride tempo and try to limit the losses. I’ve always said the first half is not going to be mine, I’ve still not got my condition back after my accident and I can’t expect to be at the front.”
Posted by videopal at 1:26 PM No comments: Links to this post