"IT'S NICE TO BE TREATED LIKE A HUMAN BEING, FROM TIME TO TIME"... 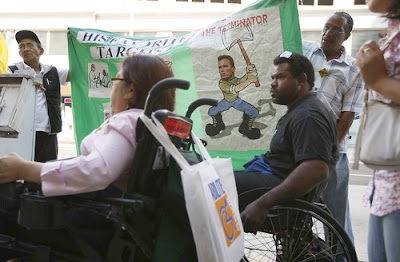 NOW IS THE TIME FOR ALL GOOD PEOPLE TO COME TO THE AID OF THEIR COUNTRY!
UNFORTUNATELY, THIS DOES NOT APPLY TO THE GRUBENATOR AND THE STATE OF CALIFORNIA: Vergonia = shameful, in Italian...Wayne.
Skip to navigation »Skip to content »
Get Yahoo! Toolbar

VIDEO:Will Neverland become the Graceland of the West?

BERKELEY, Calif. – Business consultant Katrina Kennedy has taken her young son out of preschool and put a family vacation on hold. Dairyman Mike O'Kelly is wondering whether he is going to have to let employees go.

The problem? They rely on contracts with state agencies for much of their business and, cash-strapped California may start sending them IOUs instead of money until the state has enough cash to cover all payments.

"I've dealt with the state for many, many years, and the failure of the state to come up with a budget has always caused problems for July and August," said O'Kelly, owner of Morning Glory Inc. in Susanville, which supplies milk and eggs to prisons. "This particular economic crisis, however, has me more worried than all of the others combined."

The reason for the IOUs is California's $26.3 billion deficit. Lawmakers have not been able to agree on a balanced budgetby cutting spending, raising taxes or both.

Without a balanced budget, the state controller's office says the treasury does not have enough cash to meet all its financial obligations. So IOUs were scheduled to go out beginning Thursday to private contractors, state vendors, people getting tax refunds and local governments for social services.

Assistance payments to elderly, blind and disabled people will be disbursed as usual, because the federal government is paying the state's share.

For California's small businesses and social agencies, which are accustomed to a Legislature that rarely meets the June 30 budget deadline, a lean summer is not new. Most say they expect to cope despite delays in getting paid.

Wells Fargo, Bank of America and Chase bank say they will accept IOUs from existing customers through July 10, while other banks haven't decided. Some credit unions also said they'll take IOUs, but it was unclear if payday lending businesses would cash them.

Most small businesses and social agencies are confident the state will come through eventually, and say it's a matter of when — not if — they'll get their money. Still, having the government of the world's eighth-largest economy resort to IOUs creates uncertainty.

"Getting an IOU through the summer months — I'd rather have the money, but we're prepared for it," said Kennedy, who runs management training programs for a number of state agencies. "It's when it goes past September and into October, which I'm completely anticipating this year, that things begin to get really tight."

State Controller John Chiang, who plans to issue about $3.3 billion in IOUs this month along with nearly $11 billion in regular payments, was scheduled to start printing the IOUs on Thursday, marking the first time since 1992 the state has found itself in this position.

Last time around, the IOUs went to state workers in place of paychecks, and the workers filed suit. A federal judge ruled it was a violation of the Fair Labor Standards Act, and the issue eventually was settled with the workers getting extra vacation time or, if they no longer worked for the state, cash payments.

So far, no lawsuits have been threatened over the latest round of IOUs.

The latest IOUs, called individual registered warrants, will be redeemable with interest in October by banks, individuals or anyone who still has them. The interest rate was set at 3.75 percent.

Bank of America will stop accepting IOUs after July 10 but will try to assist those customers in other ways, perhaps by waiving fees or making other arrangements on payments, bank officials said.Wells Fargo and Chase didn't elaborate on their plans for IOUs after July 10.

The California crisis came as lawmakers in several other states wrestled with recession-wracked budgets.

In Illinois, the legislative session ended with no plan for paying state employees or delivering services. In Pennsylvania, the governor is proposing a 16 percent tax increase.

Though the crisis has been coming for a while, some cannot believe California has gotten itself to this point.

Getting IOUs for payment "would be terrible as a business person, and it would put me in a really bad bind," she said, "but they can't just keep going like they are."

Bear paws man's sandwichNew Jersey man gets roughed up over bread and salami.

Elsewhere on the Web

Get an alert when there are new stories about:

A jet flies past the waxing moon over Zurich. REUTERS/Arnd Wiegmann

Invite your friends to Connect to start sharing things you do on Yahoo! News.

Robert Gauthier/Los Angeles Times
George Layton, center, takes part in a rally outside the Reagan State Building in downtown Los Angeles. Layton is affiliated with Communities Actively Living Independent and Free, which could suffer a 90% funding cut.
Nearly $5 billion in vouchers could be issued through August. Some banks will take them until July 10.
By Eric Bailey and Patrick McGreevy
July 3, 2009
Reporting from Sacramento -- Deep in debt and short on cash, California on Thursday churned out its first batch of IOUs in nearly two decades amid grumbles from bankers, growing public outrage and scant progress in negotiations to resolve the state's widening budget deficit.

The state controller's office fired up a pair of printing presses and began rolling out nearly 29,000 IOUs totaling more than $53 million, most of them destined for residents around the state still awaiting income tax refunds. Recipients also include some businesses, pensioners, health clinics, college students and many others who get checks from the state.

"We never thought we would do it again," said Dorothy Cottrill, who manages check disbursement at the state controller's office and still remembers the last time the state spun out IOUs in the lean days of 1992.

The unusual move came hours after a panel of state finance officials set the annual interest rate for the IOUs at 3.75% for banks and other financial institutions willing to accept the vouchers. Some banks, including Bank of America, Citi and Wells Fargo, have agreed to honor the paper, but only until July 10. Many recipients could receive their IOUs after that date.

Those who don't have a bank that will cash the IOUs can redeem them from the state Oct. 2, or sooner if officials settle on a solution to the financial crisis.

Rodney K. Brown, president and chief executive of the California Bankers Assn., said the state's failure to resolve the budget crisis "has placed a tremendous burden on California's citizens, communities and banks."

State officials estimated that without a budget resolution they will have to issue $3.2 billion in IOUs in July and $1.65 billion in August.

State Controller John Chiang said the IOUs "are a sign that the state is being fiscally mismanaged" and a precursor to further credit downgrades for California, already the lowest-rated state on Wall Street.

The IOUs come two days after state Senate Republicans, with the support of Gov. Arnold Schwarzenegger, blocked an eleventh-hour attempt by Democratic leaders to push through budget proposals that would have staved off the IOUs, at least temporarily.

Outside the Capitol, the mood was cross. Richard Blitz, a 73-year-old owner of a downtown Los Angeles variety store, said the IOUs seem a hollow gesture by a state government struggling for answers.

"It's candy for a hungry man," he said. "Banks will accept it for a week or two, but what will happen after that?"

Thomas Bent, medical director of the Laguna Beach Community Clinic, expects to receive more than $10,000 in IOUs and may be forced to dip into reserves after the big banks stop accepting them.

Los Angeles County officials said they should have enough cash in the bank to operate unfettered through the summer and would cash its IOUs with Bank of America. They said that after the July 10 cutoff, the county might become something of a bank, purchasing the IOUs from institutions and individuals, then holding them until they can reap the interest from the state.

The county performed a similar role when the state issued IOUs 17 years ago.

With the state economy hobbled, tax receipts waning and the budget deficit continuing to grow, the governor declared a fiscal emergency Wednesday and ordered state workers to take a third unpaid furlough day each month. He also issued a new list of proposed cuts to schools and public universities to address a deficit that his finance team now says has swelled to $26.3 billion.

On Thursday, the Department of Motor Vehicles announced it will close its offices each of the Fridays that remain in July to comply with Schwarzenegger's latest furlough order.

But the governor and legislative leaders remained divided on several fronts. Schwarzenegger wants to save money by tackling fraud and waste in the state's health and welfare programs and to deflate state worker pensions. Democrats are pressing to retain as much as possible the state's social safety net: welfare, children's health insurance, in-home support for the elderly and other programs.

The governor said during an appearance in Los Angeles that lawmakers apparently have decided "it is more important to protect state employees and to protect all of the different people and labor and special interests, rather than protecting . . . the people of California, the taxpayers."

A downcast Assembly Speaker Karen Bass (D-Los Angeles) blamed Schwarzenegger for linking a budget solution to his push for a government overhaul.

"Frankly, I have really begun to be concerned," Bass said, adding that Schwarzenegger's priority seems to be "fixing his legacy."

Still, most lawmakers left the capital for the holiday weekend. Legislative leaders said they would remain behind to continue negotiations.

Meanwhile, the controller's office pumped out the IOUs for only the second time since the Great Depression. The black-inked documents look like checks but have the words "registered warrant" emblazoned on them.

Workers placed the foot-high piles of paper promises into boxes for sorting, packing and shipping as news photographers watched.

The state's Constitution requires that education and debt service payments be made -- in cash -- before all others. After that, those who must be paid in cash include state workers, the state's CalPERS and CalSTRS pension funds, In-Home Supportive Services and Medi-Cal providers.

From the L.A. Times

From other L.A. sources

MixxShareThis
Obesity rates on the rise

A new report finds that adults and children in the U.S. continue to pack on the pounds.
Bizarre places of the world

A look at unusual destinations including the Great Blue Hole, Shark Bay, Socotra Island and Cappadocia. Photos
Design your own Rolls

We scoured the archives only to find out how photogenic she really is.
- 'Transformers' on track to become No. 1 film of the year

Save over 50% off the newsstand price. Click here to subscribe to The Times.
ADVERTISEMENT
Most Viewed
Most E-mailed
ADVERTISEMENT
Sports Headlines

Posted by videopal at 6:40 PM No comments: Links to this post